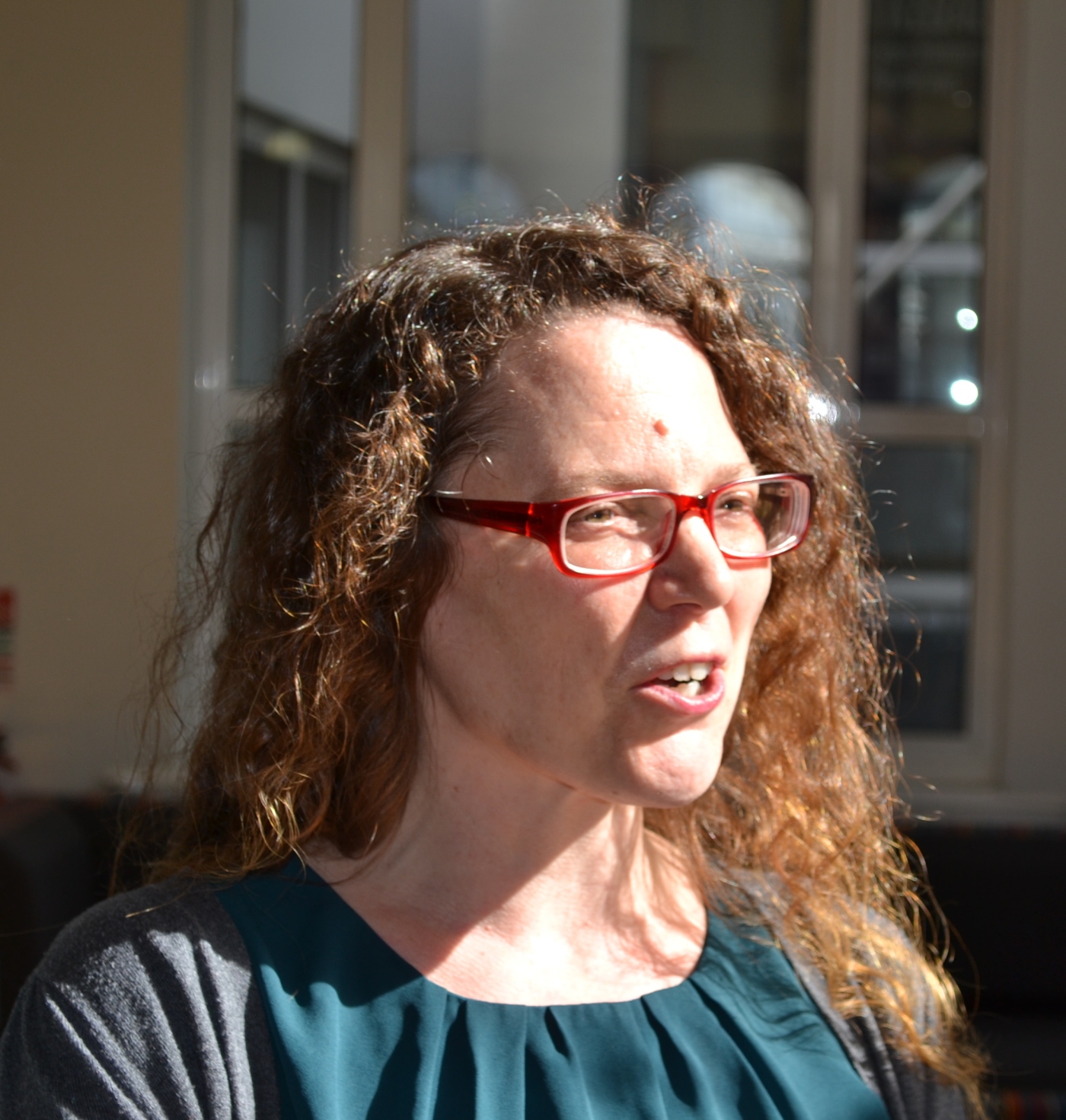 It’s a bit like looking at Alice in Wonderland as Therese Jordan in dirndl and cardigan plus mane of pre-Raphaelite tresses approaches. Only a rather too serious pair of red rimmed specs confounds the likeness.

Caution in her brown eyes vanishes when she smiles.  It’s a smile that powers through her face and settles in her eyes. And forget Alice … Therese Jordan is much more Olivia Colman.  Notably – not Olivia in her role as Queen Anne, where the sad monarch is lost to herself – but Olivia receiving her Best Actress Oscar for triumphing in front of the camera.

Therese Jordan, however, is about triumphing behind it.

Eight is quite the age to determine on a career.  Therese decided on journalism.  Seven years later she secured her own work experience at the Gloucestershire Citizen; was published, returning a year later for her school work experience.

She says “I’m really curious about people and I like writing and like interviewing people and they seem to want to tell me their stories.”

At 17 she did hospital radio and BBC local radio where she got trained to present and interview.  She also acted and whilst doing Theatre Studies A level her teacher gave her a camera, a seminal moment, “I kind of realised I wanted to be a film maker.”

“I left half way through, came home got into an abusive relationship, finished my degree in English and had two children while I was doing my degree.  The next 20 something years didn’t do any film making and thought that was that.”

For the girl who couldn’t wait a year for her school work experience that must have been agony.

Every New Year Therese’s resolution was ‘I want to be a film maker’.  Ironically, not in 2014.  But a failed interview, in 2014, at the University of Gloucestershire (UOG) led to some timely advice ‘go make a film, learn how to edit it, catch up with all the digital stuff, everything is in the library and online”. This kick-started her and she recalls thinking “You’re a film maker, that’s what you wanted to do that’s what you’ve always wanted to do.”

Fast forward two years and she is a part-time MA Photography student making films at UOG.

Therese is unfazed by the proliferation of film makers; she says “Anyone with a phone can make a film.”   But she accedes that professional film makers don’t tend to make films by accident “You’ve got to plan, prepare, get a story, you craft it, go out there, organise it and then do it and edit it.  And then put it out there to the intended audience. That’s making a film.”

At the moment she’s also being experimental.  She’s filming things that interest her, and then working out how they stick together afterwards. “The opposite way of film making”, she says.

It’s a brave move, being a 45-year-old single mum with grown-up kids, experimenting with her medium and her financial survival.  But there’s no obvious worry in her eyes. Therese acknowledges the lack of film funding and sizeable competition but says “If you are true to your art you follow it where it takes you, you hope it pays you but it’s not necessarily going to pay you, but you do whatever you do to make it because it’s something inside you that needs to be expressed and that’s the driving force really.”

She says “My tutor finally got his feature film funded and out there this year after 20 years of trying.

“I’m doing this to stay alive.  I’ll be dying inside if I stop and it’s more of a question of that kind of survival.

Out of the blue Therese says “There’s a theme of exile in everything and with every film I’ve made.”

She’s volunteered with asylum seekers in Gloucestershire.  Her current film project, Caerfaig, is about ‘exile and trauma from conflict’.  She dodges the question about abusive relationship conflict … looks away.  She’s not comfortable sharing her story like this but is galvanised by clients’ stories.

Paradoxically her project examines her own story: why is she so interested in exile? Is she in exile? What different kinds of exile are there?

“What have you been in exile from?” is asked three times. And the shutters come down.

She’s filmed four peoples’ stories around exile and trauma from conflict for Caerfaig.  Caerfaig means Welsh beach and represents a mythical landscape offering refuge.  Her subjects are exiled for different reasons including being exiled from self; “Which I have been.” Therese softly admits.

Therese is in it for the long game.  Film making sustains her.  Who knows what plaudits and awards may come her way.  She’s a voyage of self-discovery.  Seemingly, like Olivia Colman’s character she has been lost to herself, but unlike Queen Anne, Therese will be found.